Why is the labour party so ashamed of its last government?

At the time of the most recent labour leadership election none of the candidates was willing to praise the record of his government when compared with the Tories. A similar silence emanated under Jeremy Corbyn at the last election. Surely the first time in democratic politics in this country where a party has tried to get elected on the basis that it was very bad last time but would do much better this time. It did not work, which might well not be thought a surprise.

Now the issue that probably dominates in the minds of labour party members is the Iraq war. A deeply divisive and, even at the time, a very unpopular policy. But the critique is wider than that. The argument is often heard that New Labour was simply a continuation of the neo-liberal free market individualist policies instigated by the Thatcher premiership. Indeed, it appears many members of the labour party draw no distinction between the outcomes for the two periods in the area of economic policy. There are those who argue for a more positive view of new labour, for example:

but even those willing to defend the Blair and Brown governments seem unaware that its economic policy effectively reversed the pattern of income growth under the Thatcher government.

To demonstrate this I present the data for rises in average household incomes across the distribution for the periods of the Thatcher and New Labour governments, the latter including Gordon Brown’s premiership and thus the years of the financial crisis. In Figure 1 I show the total increase based on the trend growth of income in the period. While this captures what happens on average over the period it may mislead as to the differences between the beginning and end points of the premierships. So, in Figure 2 I compare the average incomes for the top and bottom decile at the beginning and end points of the two premierships. In Figure 2 I also show how the median household fared and the size of the gap in incomes between the top and bottom deciles.

It would be little exaggeration to say that the New Labour years were the exact opposite of those of the Thatcher premiership. The grey line shows increases in market incomes, while the red lines show increases in equivalised disposable income, both are total percentage changes over the period of the respective premierships. For both you can see how those increases differed across the distribution from the bottom decile (that is the bottom 10 per cent) and the top decile (the top ten per cent). 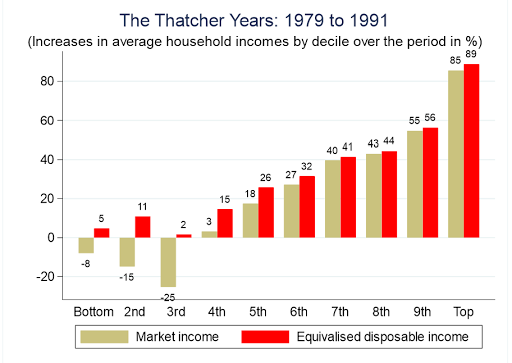 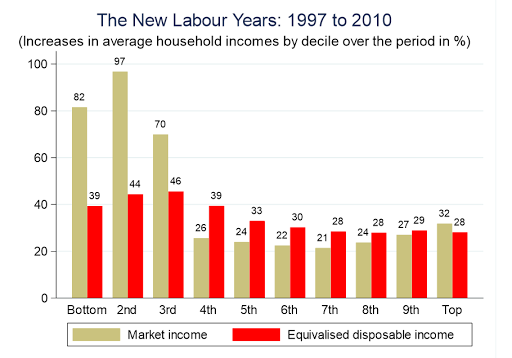 Market incomes are the wages of employees and the self-employed that the market delivers. Disposable incomes are those available to households after transfers and income taxes and national insurance. Clearly how well off is a household depends on how many adults and children there are in the households. What equivalised means is that an adjustment has been made for such differences. Thus, equivalised disposable incomes are our best means of comparing how households across the income distribution have fared.

Percentage changes are a bit abstract so what do these percentages means for actual incomes across the distribution. Further what do they mean for the gap between the rich and the poor across these years of Thatcher and New Labour economic policy. Those questions are answered by the data in Figure 2 which shows the second way of presenting the data.

Figure 2 Household Incomes across the Distribution 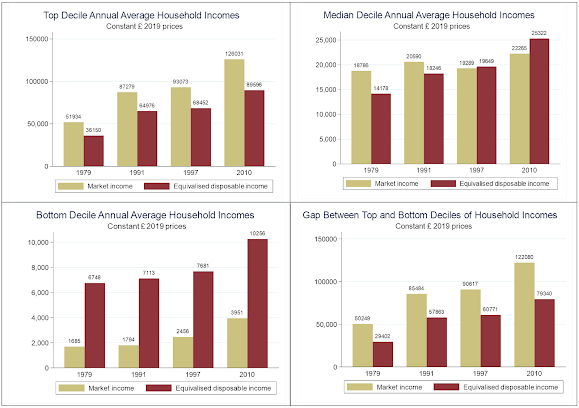 The top and bottom left charts in Figure 2 show increases in average annual household incomes (all at constant 2019 prices) for the top and bottom deciles respectively. The years shown cover the start and end of the Thatcher premiership and the start and end of the New Labour ones. The message is the same as from Figure1 but now we can put numbers on those income differences between Thatcher and New Labour.

The comparable numbers for New Labour are an increase from £68,452 to £89,596 for the top decile, a rise of 31 per cent. For the bottom decile the increase is from £7,681 to £10,256, a rise 33.5 per cent. This is less than that shown in Figure 1 as there was some slowing of the growth rate for the bottom decile during the later New Labour years. However, both approaches point to the reversal of the pattern shown during the Thatcher years for the New Labour ones.

Clearly the bottom and top deciles are the extremes of the distribution. In the top right I show the pattern for the median households. For these the two period saw virtually identical increases if we look at changes between the beginning and end points from Figure 2. If we look at trends, as used in Figure 1, New Labour does slightly better.

In the bottom right of Figure 2 we show the gap between the top and bottom deciles. It is indeed this gap which people often mean when they talk of increasing inequality. As the chart shows it is true that the gap between the top and bottom deciles has been growing both under both Thatcher and New Labour. But that reflects, not the failure of New Labour, but the assault by the Conservative government on the poor such that by1997 the level relative to the rich was so low that even the much  better performance for the poor under New Labour was insufficient to close the gap.

New labour represented a revolution in the success of economic policy toward the poorest parts of society. It is unsurprising that the Tories remain silent on this success. That they are joined in this silence by members of the labour party is a tragedy for the people that New Labour was so successful at helping.

Notes on the data used in the charts:

The data is provided by the ONS. The most recent data can be found at:

The data in the Figures is drawn from past publications of this data which seeks to provide estimates of the redistributive role of taxes and benefits on household income and inequality. The data are from our Living Costs and Food Survey (LCF), a voluntary sample survey of around 5,000 private households in the UK.

These statistics are produced at the individual level meaning, for example, that income quintiles are derived by ordering people, rather than households, on an equivalised household disposable income basis. This method is consistent with the statistics reported in Average household income, UK: financial year ending 2019 and Household income inequality, UK: financial year ending 2019, and it ensures the variance in household size across the income distribution is better accounted for.

My book – The Poor and the Plutocrats (to be published by Oxford University Press on March 24 2021) - uses this data source, presenting quintiles rather than deciles, to show how the US compares with the UK in terms of how levels of income across the distribution have changed. The book also provides more details on the data used.

The fundamental puzzle of the UK economy post the financial crisis   One of the many ironies of the Brexit debate in the UK was the fa...